From March 5 until April 26, 2020, the exhibition “Recent Acquisitions” was held in the museum Collection main atrium. It introduced the visitors to such an important area of the museum activity as the collection development and acquisition.
Currently, it is possible to acquaint with the exhibits in the regular thematic excursions. 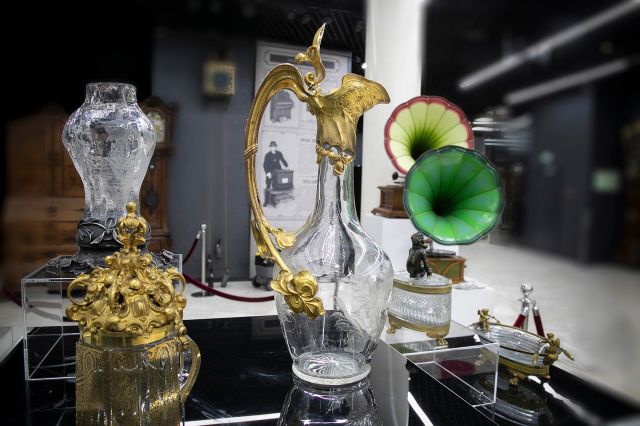 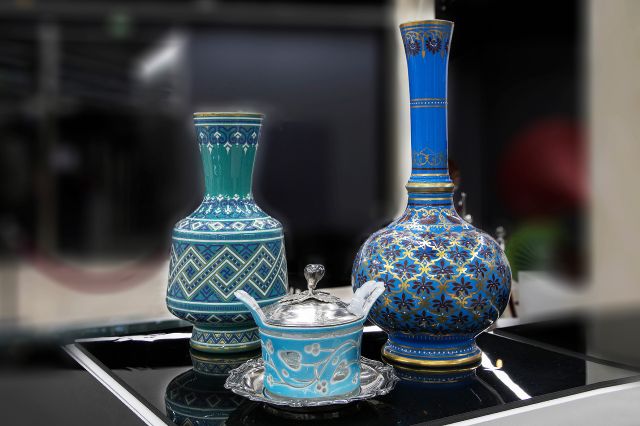 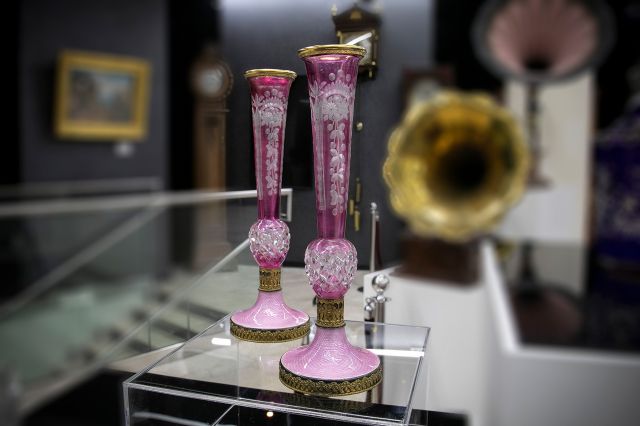 On March 5, museum Collection hosted a preview of the spring exhibition “Recent Acquisitions”. The guests of the exhibition highly appreciated the work of the museum and its contribution to the recovery and storage of the cultural heritage of Russia, as well as accessibility of the collection to visitors. Friends and partners of the museum Collection made welcoming speeches during the preview. Honored Worker of Culture of the Russian Federation, fine art expert, historian Andrey Gilodo; well-known collector Konstantin Zhuromsky; the Moscow Kremlin Museums leading researcher-keeper Tatyana Muntian, Professor of Stroganov Moscow State Academy of Design and Applied Arts Kirill Gavrilin.

Andrey Gilodo, fine art expert, historian, Honored Worker of Culture of the Russian Federation, Advisor for repository acquisition to the Director of All-Russian Decorative Art Museum.
“The exhibition gives an illustrative, descriptive and emotional concept of an art object in the sphere of decorative and applied arts. The museum employees are very mindful and responsible towards what they are doing, and the results are demonstrated at this exhibition, as well as in the entire exposition”.
Tatyana Muntian. The leading researcher-keeper of the scientific-keeping department “Armoury” of the Moscow Kremlin Museums.
“Museum Collection is an amazing point on the cultural map of Moscow. The Museum main activity is acquisition. It would seem a wonderful museum, with elaborate exposition and abundance of exhibits. Hence, people do not stop and continue to replenish the collection - every item is of great interest".
Konstantin Zhuromsky, collector Gallery "Cabinet"
“David Mikhailovich brought the idea of private collecting in the museum to the absolute .... Time destroys things; all collectors and David Mikhailovich are time curators. Each of us preserve fragments of the past, and thanks to this, art objects remain in eternity. One can imagine a pattern of the gone time considering them. The meetings in the museum Collection are amazingly global. David Mikhailovich is the salt of the earth for many collectors. The majority of collectors are introverts and do not demonstrate their collections to wide audience. David Mikhailovich gives an excellent example of the collection openness and transparency, and cooperation with other museums, including the state ones. I believe that private collectors should be appreciated".
Kirill Gavrilin. Head of Chair of Art History and Humanities, Professor of Stroganov Moscow State Academy of Design and Applied Arts
“It is a great honor to be present at the exhibition in the museum of David Mikhailovich and Mikhail Davidovich - one of the best private museums in Moscow. Many thanks to the museum staff - it is small in number quantity but very mighty. Being a museum employer in the past, I am able to appreciate the potential of this museum. Expositioners, scientific employees, researchers, guides - all this makes this museum an excellent partner for the largest museums in the capital and regions of Russia. It is very interesting and important for us to cooperate with you not only in the sphere of exhibition projects, but in the sphere of education as well. We are 200 years old. We are glad that a sizable part of the museum “Collection exposition is devoted to the history of the Imperial Stroganov School, as well as to the firms of Ovchinnikov, Faberge and others, where the Stroganov employers worked during the reign of Nicholas II. I heartily congratulate you on the opening of a new exhibition. Many thanks from not only from the Stroganov Academy rector, but on behalf of the student community for the heritage line that you give us”.

The art pieces of Russian and Western European decorative art, dating back to the 19th-20th centuries, which enriched the collections of silver, glass and ceramics artworks, are selected for display.

The earliest items of the Russian decorative art items on display are a casket and a vase topped with cast putti figurines. They belong to the first third of the 19th century, to the Empire style, and demonstrate the typical combination of glass with patinated bronze details. The products of one of the oldest St. Petersburg jewelry firms "Nichols & Plinke" date back to the 1840s. This is a dish for truffles made in the Russian style, in the so-called "imitation" technique, as well as distinctive items of the tea set - "transformer", in which not only the lids, but also the handles are detachable as well. The products of glass factories of the 1850-1880s represent the Historicism style trends. Paired decanters made of transparent colorless glass with cobalt tint, decorated with enamel painting in the style of the Second Rococo, demonstrate the products of the Bakhmetevs plant, one of the largest private glass factories in Russia. The magnificent vases of blue frosted glass, made in the Oriental style during the reign of Emperor Alexander II and being a truly valuable acquisition of the museum, reflect the activities of the Imperial Glass Factory (IGF) in the 1860-1870s. The same can be referred to the flask of 1864, the model for which was the Chinese porcelain vessel of Tsarevich John Ioannovich, the son of Ivan the Terrible, as testified in in the work "The Antiquities of the Russian Empire" by the Academician F.G. Solntsev. Decorative plate with the stylized polychrome image of a two-headed eagle, made by the IGF artisans in the Venetian style, dates back to the 1880s. The earlier items of this enterprise are represented by caviar serving bowl of the 1840-1850s, made of multilayer colored glass, the production of which was mastered in the second quarter of the 19th century, and uranium glass, which was manufactured at the factory in the 1830-1840s. Of interest are the items made in the 19th century - a mug of colorless glass with ruby flashed glass details (IGF), as well as a pair of single flower vases (Russia?), combining colorless glass with flashed glass, bronze and guilloché enamel. The last third of the 19th - early 20th centuries is represented by multifarious products of jewelry firms. Thus, the collection of works by Carl Faberge firm was supplemented by two teapots of 1908-1917, created by the artisans of its Moscow branch. The Cane handgrip (handle) made in the Neo-Russian style in the form of a fairy-tale character holding a bird is especially peculiar. The grip was made at the Moscow branch of the company in the period of 1908-1917. The artisan A.F. Petrov from Petersburg was the author the cup (last third of the 19th century), decorated with polychrome enamels. His workshop, which processed various types of enamels, was famous for the high quality of work and it collaborated with the firms of Grachev and C. Faberge. This item replenished the museum small-scale hence valuable collection of items by this workshop. The classic style cigarette case presented at the exhibition, made in the period of 1908-1917, is a sample of the famous Kiev factory of I. Marshak products. The works of this enterprise, which competed with the firm of C. Faberge, are presently very rare due to the small number of preserved items presented in various museum collections, as a rule, in single copies. Paired vases that complemented the collection of crystal in silver setting, were made at the Moscow workshop of Ivan Tarabrov, whose products were preserved significantly fewer than the works of the jewelry workshop of his brother Nikolay Tarabrov. Filling the gaps, the museum managed to replenish the collection of art silver with the items from the Moscow plated silver workshop of S.M. Ikonnikov (caviar serving bowl, the 1850s) and St. Petersburg silverware workshop of N.D. Yanichkin (miniature ladle, 1888-1895), whose works were not previously presented in the museum collection. European decorative art is represented at the exhibition by several items made in the middle and second half of the 19th - early 20th centuries. These are the Historicism style goblets made of copper ruby glass and mugs with fancy crown-like lids; the Art Nouveau style decanter decorated with thistles and irises; a toiletry box by Daum Frères manufactory made of colored laminated glass, complementing the collection of glass in the Galle style. Of particular note is the rock crystal vase of the early 20th century, made especially for the Moscow branch of the Boucheron Trading House, which supplied the Russian Imperial Court. The faience jug of the first third of the 19th century, most likely of English production, presented at the exhibition is also of great interest. The jug is decorated with the images of the Ural Cossacks, samples for which were two engravings of 1813 by the unknown English engraver, made according to the drawing by the artist Aleksander Orłowski and published in London. The item perfectly complements the collection of the artist's works presented in the museum. Thus, this exhibition, timed to coincide with the beginning of spring, not only acquaints the visitors with a number of scientifically and artistically valuable exhibits, but is a kind of creative report on the museum's work in the sphere of research and search for new works.

On March 6, the Museum Collection opened the spring exhibition "Recent Acquisitions", acquainting the visitors with such an important area of the museum activities as the collection replenishment and acquisition. Art objects of Russian and Western European decorative art were selected for display

Audio recordings of this section are intended for private listening. Commercial use, public reproduction on TV and radio is forbidden. All musical instruments, mechanisms and music storage devices are a private property and are a part of funds of the Collection museum.