75
years of
the Great Victory
To commemorate the 75th anniversary of the Great Victory, museum Collection prepared the exhibition of sculptural works of the second half of the 1940s-1960s, dedicated to the Great Patriotic War
The victory of the Soviet people, who defended their country and liberated Europe from the fascist oppression, finds its natural expression in monumental sculptural works of the post-war years. This form of art, like no other, is intended to immortalize the war and its heroes in stone and bronze monuments. During the second half of the 1940s-1960s, not only the grandiose memorials and ensembles dedicated to the feat of the people and embodying the idea of Victory and Glory were erected on the territory of the Soviet Union, but an ample quantity of small statuary sculptural compositions were created to document the heroes’ images and the recent past as well.

The Yalta (Crimean) Conference of the Allied Powers (February 4–11, 1945) —the second multilateral meeting of the leaders of the three countries of the anti-Hitler coalition — the USSR, the USA, and Great Britain — during the Second World War, dedicated to the establishment of the post-War world order. The conference was held in the Livadia (White) Palace in the village of Livadia, 3 km from Yalta (Crimean ASSR, RSFSR, USSR). The Yalta Conference of the USA, the USSR and Great Britain leaders was of great historical significance. It was one of the major international wartime meetings, an important milestone in cooperation of the anti-Hitler coalition Powers in waging war against the common enemy. The adoption of agreed at the conference decisions once more showed the possibility of cooperation between the states with various social systems. This was one of the last conferences of the prenuclear era. The bipolar world created in Yalta and the division of Europe into east and west had been preserved for more than 40 years, until the late 1980s.

Impressed by the meeting of leaders of the three countries of the anti-Hitler coalition in Yalta on February 4-11, 1945, the artist sculptor Alexander Grube performed the work “Stalin, Roosevelt and Churchill”. The composition, created in 1945 according to one of the numerous photographs of those years and depicting the allies sitting in armchairs, is a sketch for an unrealized monument.

Alexander Grube (1894-1980) - Belarusian and Russian sculptor, people's artist of the Belarussian SSR (1944). Born in the village of Grigoryevka, Bashkir Autonomous Soviet Socialist Republic. Studied at St. Petersburg University. A self-taught sculptor. Attended sculptural class in the Leningrad Academy of Arts, followed the advice of Ivan Shadr (in Moscow). Worked in Belorussia since 1918, since 1941 - worked in Moscow. Taught at school in Krasnopolye, the Mogilev region (1918-1922). Participated in art exhibitions since 1925. In 1927-1929 - one of the organizers and a chair of the All-Belarusian Association of Artists. Member of the Belarusian Union of Artists (1940). Chair of the Board of the Union of Artists of the Belarussian SSR (1942-1944). Worked in Moscow since 1945. Worked in the sphere of indoor composition, relief and monumental sculpture. Was influenced by the Belarusian folk wooden sculpture. 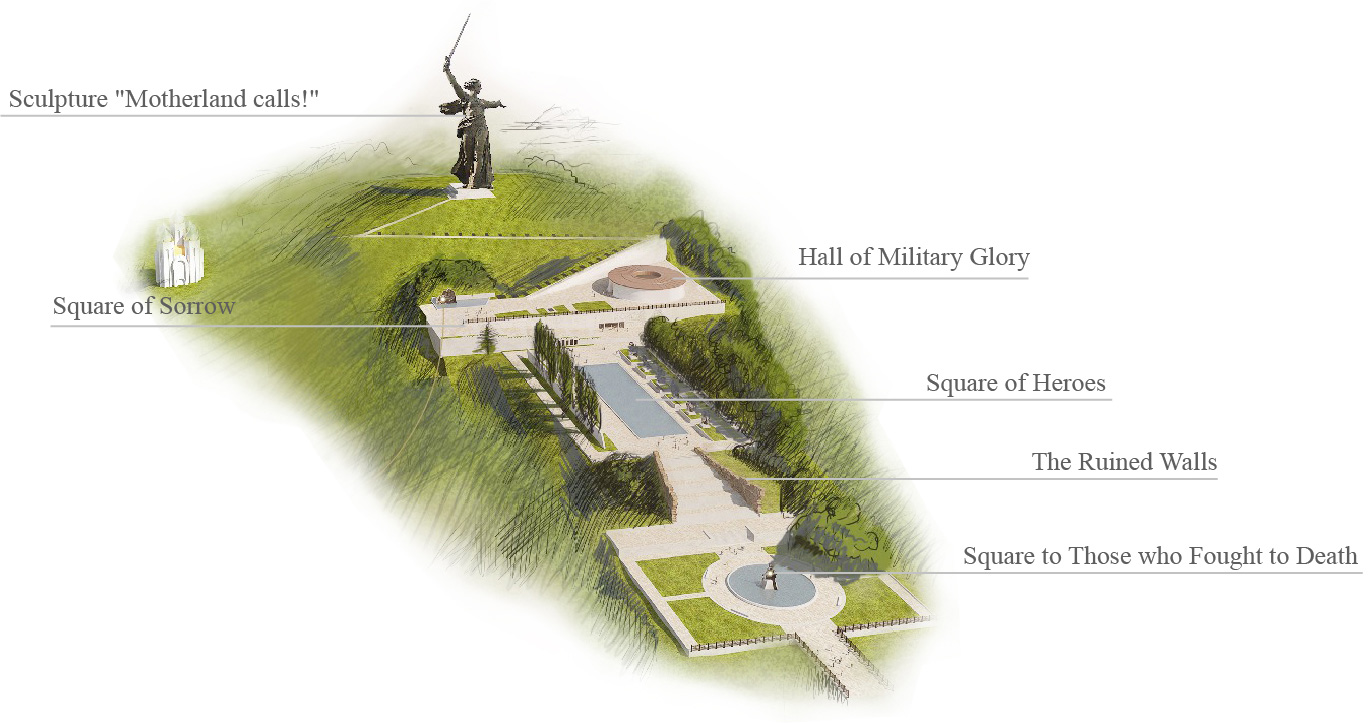 The sculpture “Stand to Death”, a reduced model of which is stored in the museum Collection exposition, is the compositional center of the eponymous square of the grandiose memorial “To the Heroes of the Stalingrad Battle” on the Mamayev Kurgan. It symbolizes the most difficult period of the Stalingrad Battle. The ensemble of the square was built in 1959-1967 within the framework of the entire complex construction, which was realized according to the sculptor E.V. Vuchetich project. The central part of the square surface, paved with granite of the total area of 4.22 thousand square meters, is occupied by a circular pool of 35.2 m diameter that symbolizes the Volga river. The figure of a Russian warrior-hero, 16.5 m high, as if rooted in the Volga bank, is in its center. The soldier’s right hand squeezes a grenade; his left hand holds an assault rifle. His native land and waters give him strength to repel the enemy. The inscriptions are on the concrete block: “Not a step back!”, “Stand to death!” - extracts from the Order No. 227, which was issued during the most trying period of the bat Stalingrad battle.
According to E. Vuchetich conception, the sculpture of the Motherland defender growing out of earth turns into an indestructible rock, the bastion on the enemy’s path. It is located in such a way that it shields the monument “The Motherland” standing in the distance.
It is considered that the authors of the monument allotted the warrior with the facial resemblance of Marshal of the Soviet Union, the 62nd Army commander, Vasily Ivanovich Chuikov. 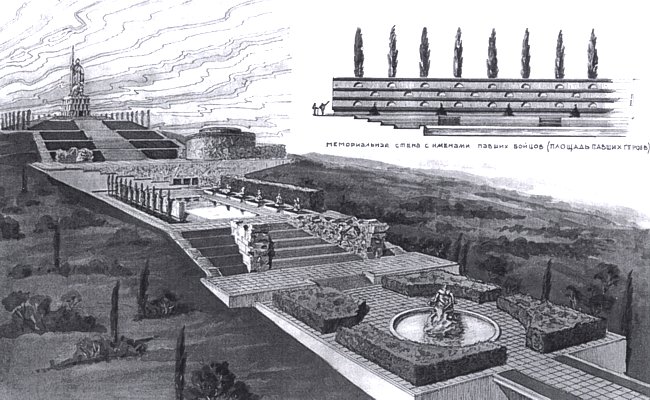 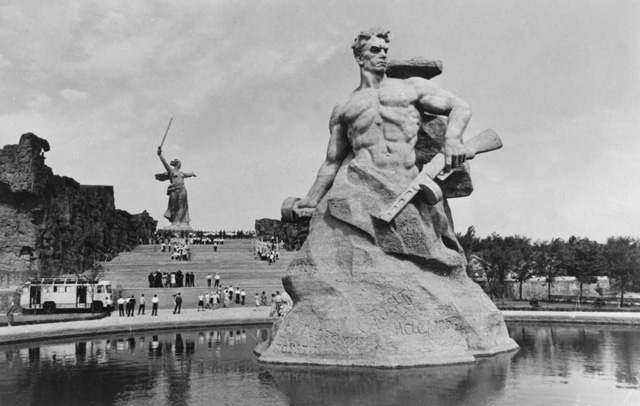 The memorial construction started in 1959 and lasted for 8 years. On October 15, 1967, the monument was solemnly unveiled. Building the memorial, the authors sought to reconstruct the images of the heroic Motherland defenders, to manifest the future generations their great aspiration to win; to provide means of experiencing the atmosphere of fighting in the great battle on the Volga and to let a contemporary to feel like the participant of the Stalingrad Battle.
The memorial features a series of architectural and extensional links as if beaded together on a single axis. As one ascends the mound, more and more new elements and compositions of the memorial are disclosed, the center of which is the sculpture "The Motherland Calls" that dominates the city (according to the original design, a two-figure composition was to crown the hill: the Motherland figure with the Victory banner in its right hand and sheaves of ears in its left hand and a soldier with automatic rifle, kneeling and kissing the ears. Later author’s intention changed. Despite the fact that the victory in the Stalingrad Battle marked a drastic turning point during the Great Patriotic War, the final victory was still far away). Sculptor Yevgeny Vuchetich noted about his work: “The warriors laid their heads in the name of life triumph, in the name of the victory over evil forces, violence and death. This was the meaning of their sacrifice and exploits. This constitutes the main content of the ensemble”. This idea pierces all components of the memorial complex: “Stand to Death” Square, “Walls-Ruins”, “The Heroes' Square”, “Hall of Military Glory”, “The Square of Sorrow” and the central sculptural monument - “The Motherland Calls!".

Soviet sculptor-monumentalist, tutor, professor. Vice-President of the Academy of Arts of the USSR (1970-1974). Te Great Patriotic War veteran, the retired lieutenant colonel. Studied at the art school in Rostov-on-Don (1926–1930), at the Institute of Proletarian Fine Arts in Leningrad (1931–1933), studied under Aleksandr Matveyev. Since 1935, lived in Moscow. In 1941–1943 was at the front where he got a shell shock. 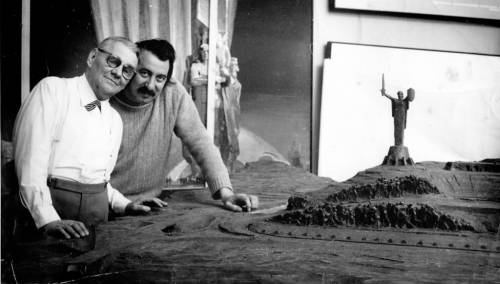 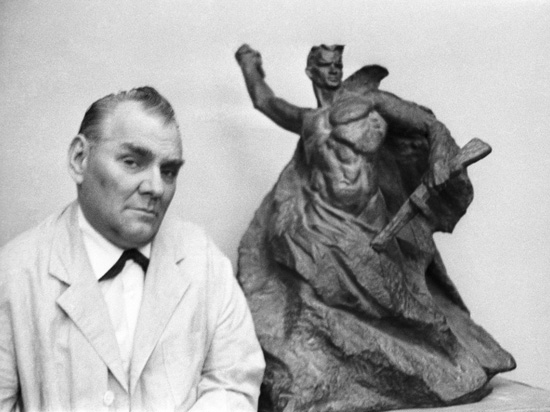 Member of the Studio of Military Artists named after Mitrofan Grekov (since 1943). Being one of the leading figures in the official Soviet monument art of the 1940-1960s, he revealed the theme of the people's heroism during the Great Patriotic War in his creative work with dramatic pathos. Vuchetich was gifted in the portrait genre as well. He is the author of portreit busts of Vladimir Lenin, Joseph Stalin, politicians, Soviet military leaders and heroes of labor. Was awarded with two Orders of Lenin.

During the 1950-1960s, small-scale memorial monuments were erected to commemorate battlegrounds, places of tragic experience and burials. Such is the reduced copy of the monument “The Young Guard members” presented at the exhibition (a draft version?). It was reated by the sculptors V. Agibalov and V. Mukhin in 1951-1954 in Krasnodon, a city in Luhansk region of eastern Ukraine to commemorate the feat of the members of the Komsomol resistant organization. Combat teams of the Komsomol anti-fascist organization “The Young Guard” that was created in 1942 and remained in force only for three months, attacked German convoys of trucks, printed and distributed anti-fascist leaflets, released seventy prisoners of war from a concentration camp, burned a labor exchange with the lists of more than two thousand people, which were planned to be taken to Germany.

The courage and heroism of young members of the resistance organization, whose age in most cases did not exceed 19 years, became widely known; their feat caused a great rise of patriotism in the struggle against the Nazi invaders
Mukhin V., Agibalov V.
Model of the monument "The Young Guard"
Late 1940s – early 1950s (period from 1948 to 1951), bronze 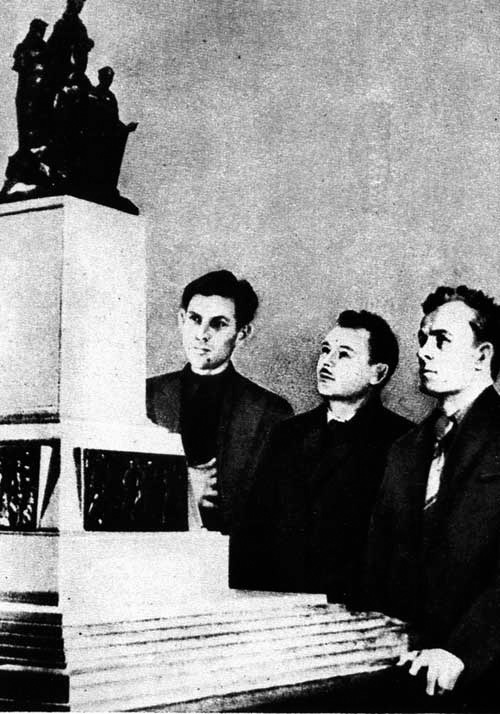 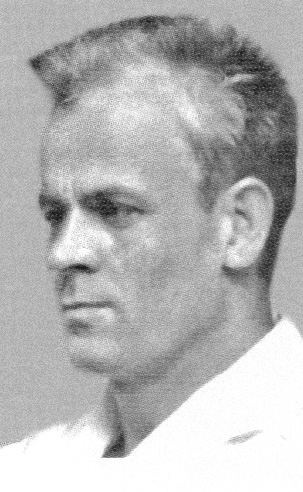 A prominent sculptor from Lugansk. Member of the National Union of Artists since 1946. Born in Gorlovka (formerly the village of Zaitsevo). After finishing school, entered the Kiev Art Institute, graduated with honors in 1938. Before World War II, Viktor Mukhin moved to Lugansk (at that time Voroshilovgrad), where he lived his entire life. Worked at the Lugansk Art school, headed the regional Union of artists and was engaged in creative activities. After the war, Mukhin led a group of sculptors that elaborated the cult monument of the Luhansk region - the monument to the «Young Guard” (Soviet resistance). 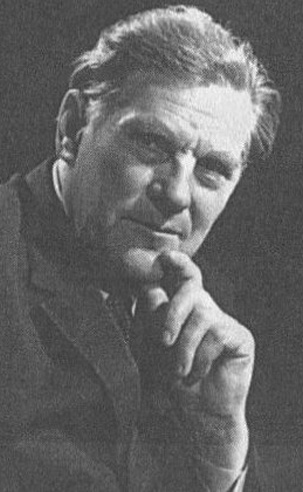 Soviet and Ukrainian sculptor, teacher. People's Artist of Ukraine (1978). He studied at the remedial school for workers at the Kiev Art Institute (1932-1933), at the Kharkov Art College, then at the Kharkov Art Institute (1934-1942) attended the class of Professor E. A. Bloch. Member of the Kharkov organization of the National Union of Ukrainian Artists since 1942. The Great Patriotic War veteran. Lectured at the Voroshilovgrad Art College (1944-1949), then at his native institute in Kharkov (1949-1954). Worked at the Kharkov sculpture factory under the Art Fund of the Union of Artists of the Ukrainian SSR. Participated in republican, all-union and international exhibitions since 1942

A multi-figured sculptural composition depicting the most illustrious and active members of the resistant organization headquarters was erected in the city center at the place where the young heroes were inearthed in the collective grave of honour in March 1943. Oleg Koshevoy is in the center of the composition, to his right and left are Sergey Tyulenin and Ivan Zemnukhov, slightly below are the figures of Lyubov Shevtsova and Ulyana Gromova. According to its artistic, stylistic and technological peculiarities, the presented work is ought to be backdated to the late 1940s – early 1950s and attributed to a rare casting of a resemblant, emblematic and exhibitional nature, reated, perhaps, in the context of the all-Union competition for the construction of a city monument in Krasnodon.

The image of a Victorious Soldier was one of the most common and beloved images in the works of the Soviet sculptors of the post-war years. In most cases, he was generalized, but always upbeat, heroic and life affirming. Sculptor S. Andreichenko, whose works are presented at the exhibition as well, addressed this topic repeatedly. Two soldier’s figures that he created were executed differently – the figure of a soldier – the Motherland liberator was a static one, with a raised shoulder arm, and more dynamic figure was holding a banner. These easel works might be the sketches of the monument to the Soldier-Liberator.

Semyon Andreychenko (1919-) - Soviet and Ukrainian sculptor, member of the Ukrainian Union of Artists since 1960. Worked in the sphere of indoor and monumental sculpture. Was born in Ekaterinoslavl province. Received a seven-year education in the village of Zaporozhe (Sophievskiy district) in 1934. Recalled that when he was studying at school, he did not do prep in the warm season - he did agricultural work. In winter, he became engrossed in reading of “Kobzar”, and often cried about it. Graduated from the Dnepropetrovsk Art College in 1939. The Great Patriotic War veteran since November 1943, an artilleryman, was wounded in action in March 1944. Was awarded with the Order of the Red Star and the medal "For Courage" for bravery and heroism in April-May 1945. After the war, continued his studies at the Kiev Art Institute (his tutors in sculpture were - Mikhail Lysenko and Alexey Oleynik), from which he graduated in 1952. Participated in art exhibitions since 1960.

Audio recordings of this section are intended for private listening. Commercial use, public reproduction on TV and radio is forbidden. All musical instruments, mechanisms and music storage devices are a private property and are a part of funds of the Collection museum.